At face value, Wednesday was a pretty sour day for the GOP. Two Republican members of Congress — Bill Flores (TX-17) and Jim Sensenbrenner (WI-05) — announced their retirements, choosing against seeking reelection to the House in 2020.

This news was especially alarming when looking at the broader picture: Flores and Sensenbrenner join thirteen other House Republicans in their decision to retire. To be fair, two of them, Bradley Byrne (AL-01) and Greg Gianforte (MT-AL), are seeking higher office, running for Senate and Governor respectively in their home states. But the rest are seemingly gone for good.

At the time of writing, there are fifteen Republican House members retiring, and four Democrats. Such a disconnect is nothing new — we’ve seen a double-digit difference in the number of retirements in numerous elections this century, including 2018, 2016, 2008, and 2000. Since three of those four years saw major gains for the party with fewer retirements, it’s not hard to see why Republicans could be worried; the thirteen Representatives bowing out may just read the writing on the wall.

But let’s look at this a bit deeper. Where exactly are these retirees from?

To better understand the districts these delegates represent, I referenced two statistics: their margin of victory in the 2018 midterms, and the Cook Political Report’s Partisan Voting Index (PVI), a measure of how Republican or Democratic a district leans compared to the nation. Together, these numbers give us an idea not only of how the district might look with two fresh faces running, but also the impact the incumbent had on the electoral result.

Here’s what I found:

Only four Representatives are from districts with a PVI between R+8 and D+8, and all but Will Hurd (TX-23) managed to outperform their benchmarks. On top of that, only five of the retirees won by single digits last November.

With this in mind, my best guess is that most of these retirees aren’t leaving because they’re scared of being re-elected. That might be the case for some, like Martha Roby (AL-02), who faced a serious primary challenge in 2018. The same applies to three of the five retiring from the Texas delegation — while a “blue Texas” is still far from guaranteed, Democrats did flip two districts in the state during the most recent midterms, and the suburban TX-22, TX-23, and TX-24 could be the next to go.

The likelihood of any district flipping depends a lot on the national environment, too. Though we’re still far out from November 2020, current generic ballot polls give Democrats an edge of about 6 points. That’s subject to change, of course, but if the trend holds, these R+8 areas could get competitive.

Instead, I think the motivating factor for many is age; for instance, Jim Sensenbrenner is in his 21st (!!!) term. Charting everyone’s age tells a similar story: 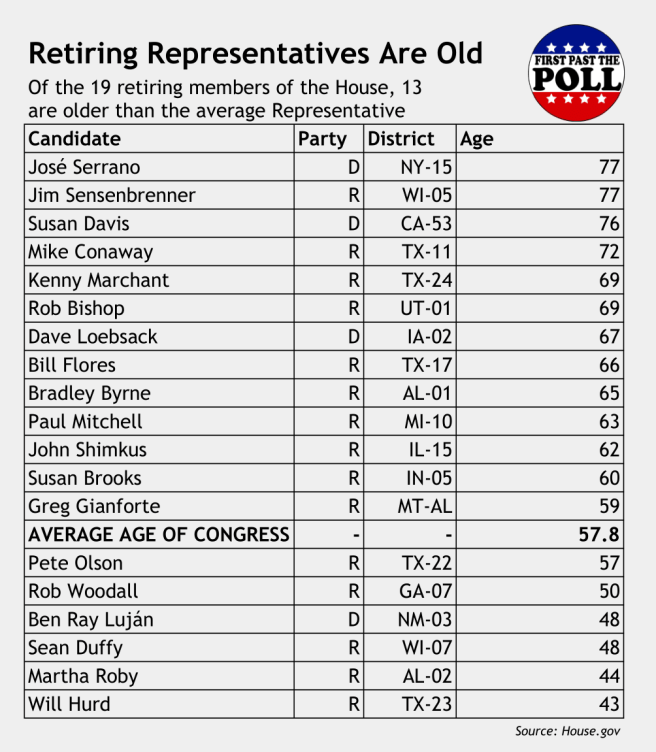 Of the nineteen retiring members of the House, thirteen are older than 57.8, the age of the average Representative. As for the six others — Olson, Woodall, Roby, and Hurd could be in electoral jeopardy, Luján is hoping to fill Tom Udall’s Senate seat in New Mexico, and Duffy is taking time away to be with family.

In short, it’s not far-fetched to assume that most of the current retirements are driven by personal factors, rather than the fear of losing.

And if age really is causing many of these retirements, we should expect this trend to hold. As Cook Political’s Dave Wasserman pointed out on Twitter, in California delegation, nine Democratic incumbents will be older than 75 on election day, and another eleven will be older than 65.

No matter the reason, one thing’s certain: with many potential freshmen possibly joining the 117th Congress, 2020 race for the House will be one to watch.

Bradley Wascher is a number-crunching political analyst, currently for the nonpartisan newsletter Inside Elections. He is also pursuing an M.A. in American Government at Georgetown University, having studied Political Science and Applied Statistics at Western Kentucky University. Bradley can be found on Twitter at @BradWascher. View all posts by Bradley Wascher