In last week’s post, I mentioned how potential 2020 presidential candidate Beto O’Rourke has seen his polling averages decrease over the past few weeks, something I attributed to a lack of media buzz.

Naturally, on the other side of the coin lie the politicians who have been in the public eye: the (at the time of writing and depending on who you ask) 12 currently announced Democrats running for president.

In the below chart, I graphed the performance of the top five — Kamala Harris, Elizabeth Warren, Cory Booker, Amy Klobuchar, and Kirsten Gillibrand — in polls from the Morning Consult, making note of how each candidate’s numbers changed following the launch of their presidential campaign or exploratory committee. While Morning Consult surveys don’t have the best track record ever, they’ve definitely been the most prolific pollsters of this election cycle, providing ample data for looking into the trends thus far.

For now, Bernie Sanders is excluded, because he literally just announced two days ago, and there haven’t been any polls released since.

This is what I found: 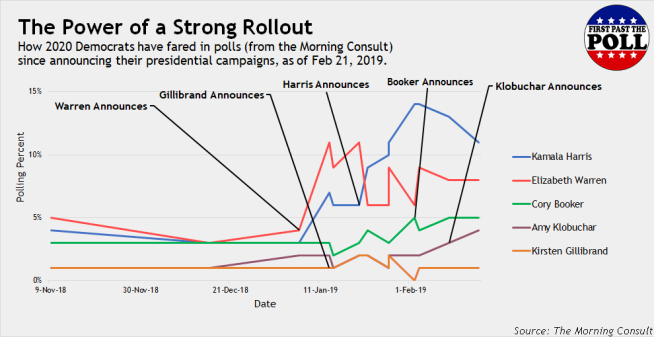 As the chart demonstrates, Harris and Warren saw the biggest boosts, with the former’s numbers doubling. Contrarily, Booker and Gillibrand experienced little to no gains.

Here’s a more detailed, and less aesthetically pleasing, breakdown, which also includes Sanders and the announced candidates who are still polling at 1% or below:

Again, much of the same. Interestingly though, Hawaii Representative Tulsi Gabbard and South Bend, Indiana mayor Pete Buttigeg didn’t appear in any polls until after launching their campaigns. I suppose that’s technically a boost?

In the end, while it can’t be stressed enough that early primary polls are subpar indicators of how the election will eventually play out, it’s nevertheless interesting to see how campaign announcements have moved candidates’ numbers, even for just the short term.

Bradley is a political data analyst. First Past the Poll is his blog. View all posts by Bradley Wascher

One thought on “Chart: How Presidential Campaign Announcements Have Affected Polling Numbers in 2020”