After this week’s deluge of news, I had hoped to write an article about the likelihood of Donald Trump’s impeachment. Only one problem: everyone already did. That got me thinking, “Well, let’s see how many people beat me to the punch.” And here we are.

For those who aren’t in the loop, everything went down last Tuesday, August 21st. Specifically, Mr. Trump’s former campaign chair, Paul Manafort, was found guilty on 8 counts of various financial misdeeds. Further, the president’s previous lawyer, Michael Cohen, admitted in a guilty plea that he paid off two women in 2016, in hope of purposely “[influencing] the election…at the direction of the candidate.” Though Mr. Cohen didn’t mention which candidate, Mr. Trump was quickly implicated.

These two events have reignited wide debates regarding the president’s chances of being impeached, and with the odds of a Democratic victory in the House high, those hypotheticals very well could become reality. So, just how many people are looking into the topic? 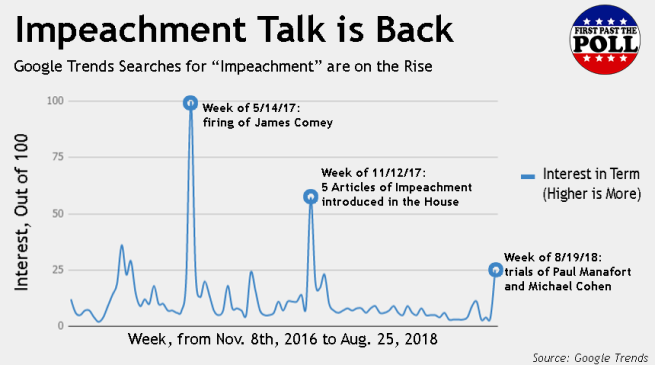 The above graph tracks interest in the term “Impeachment” from November 8, 2016 (the day of Mr. Trump’s election) to August 25th, 2018 (the day of this piece’s publication). It suggests the past week has seen the 4th-highest interest since the president’s Electoral College victory nearly two years ago.

The two other weeks with a significantly higher interest in impeachment were May 14th, 2017 and November 12th, 2017. A time-restricted Google search under both dates provides context. The week of May 14th, 2017 (the time of highest interest) happened after the dismissal of James Comey from the FBI. The immediate fallout led to calls for impeachment from Democrats in the House of Representatives. The week of November 12th, on the other hand, saw the introduction of five articles of impeachment against the president, due to possible Russian collusion.

Likewise, the cause for heightened public interest in the last few days are clear — two men with close ties to Mr. Trump recently made damning appearances in federal courthouses. If anything, these recent stories could provide the most direct reasons for impeachment. Why, then, isn’t this conversation bigger?

The main difference between this event and the other two could exist in who is talking about impeaching Donald Trump. 2017’s weeks of May 14th and November 12th each featured a legitimate, tangible push from House Democrats, in some form or another. This past week, however, the talk has been speculative, and mainly from media outlets or Republican leaders. After all, as the FiveThirtyEight article linked above demonstrates, Democrats have stayed relatively mum on the issue this go-around.

Thus, we are seeing less interest in impeachment because it isn’t the news right now; it’s simply an extrapolation of the news, one that’s not reaching the public. If House Democrats were to come forward with actions reminiscent of what they did twice last year, interest might again skyrocket. Right now, though, these are vague discussions that are only being had in certain circles. For casual news readers, this might not really matter. For the president, this might be reason enough to let out a sigh of relief.

Bradley Wascher is a student at Western Kentucky University, studying Political Science and Applied Statistics. He can be found on Twitter at @BradWascher. View all posts by Bradley Wascher